THE GIFT OF GRATITUDE

The feast is finished, the leftovers have been dispatched, and the dishes all washed and put away. Thanksgiving Day may be over, but I choose to foster an ongoing attitude of gratitude and make everyday a Thanks Living Day. So, in that spirit, you're invited to watch this four-minute segment from my talk last Sunday on cultivating gratitude, followed by "Everything's A Gift" - a new song written for the occasion.

It's a live recording, so it's not as polished as a studio recording might have been, but thanks to the technical wizardry and generosity of Eddie Wise and Kiko Guerrero, I think the magic of the moment comes through quite well - and I trust you will agree.

Or perhaps you'd rather simply sit and simmer in silence, feeling warm, fluid waves of gratitude ripple through you and out into the world. In any case, I hope that you, too, find yourself feeling grateful to be alive, loved and loving - today, and every day. Happy Thanks Living!

Rudi
PS: To further help celebrate the spirit of Thanks Living, vocalist Sarah Gabriel and I are cooking up an extra big helping of songs that we'll perform (and hopefully, record) with the Circle Band this Sunday. Join us for what promises to be a particularly joyful Sunday Circle!
Posted by Celebration Circle at 7:57 AM No comments: 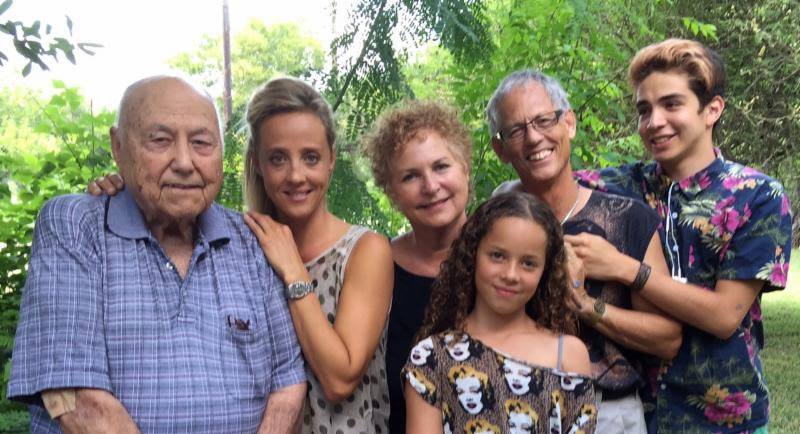 Last summer while my daughter and granddaughter were visiting from the Netherlands we got this sweet snapshot of us standing together with Zet, Mateo and my father. Seeing four generations of my family in that one frame always makes me smile, always sends a warm glow through my heart. That's why I keep a print of that shot on my desk, to help me stay grounded in gratitude.
Anytime I find myself feeling temporarily grumpy, all I have to do is look back at that photo, and feel the power of all that love surrounding me, and I'm back on track to feeling like I'm one of the wealthiest and luckiest men on the planet.
GROUNDED IN GRATITUDE
I'll spare you the intricacies of the details here. Suffice it to say that the backstory of how those people in that photograph came to be interwoven across four generations, three continents and too many miracles to count, is so complex and improbable, that I can't help but feel extraordinarily blessed and grateful for the many gifts that have been showered on me and my family.
That's why this particular photo is one of my all-time favorite triggers for feeling grounded in gratitude on a regular basis. Even just writing these words sends a flood of warm feelings rushing through me right now.
SHARING THE ATTITUDE
So, in the spirit of Thanks Living, I invite you to take a few moments right now to think about one or more of the particular blessings in YOUR life. Won't you allow yourself to focus on your blessing(s), then slip into an attitude of gratitude right now? And let those feelings of gratitude, love and joy ooze out of you, spilling beyond the borders of your physical self and out into the world?  Ahhh...   May all beings be blessed by your willingness to do this!
With gratitude and best wishes for Happy Thanks Living,
Rudi
PS: I hope you'll be able to join us this Sunday morning at SAY Sí for an extended meditation and reflection on gratitude, and then stay for our Potluck Feast afterwards. A good time will be had -- and it wouldn't be the same without you!
Posted by Celebration Circle at 7:58 AM No comments:

ONWARD THROUGH THE FOG 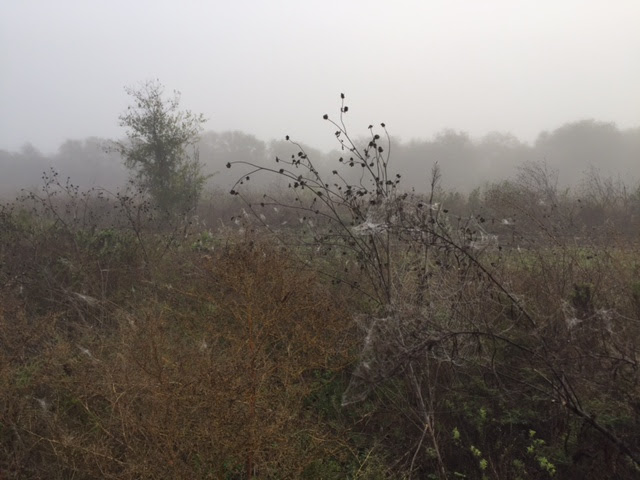 A thick blanket of fog hovers down low to the ground, and I can scarcely see my dogs as they dart along the path a few yards ahead. It's the first foggy day of autumn, adding an ethereal, otherworldly twist to our daily, early-morning ritual of walking along the gravel trail that winds through our neighborhood along the banks of the San Juan Acequia. We're less than two hundred yards from the Mission Reach section of the San Antonio River walk, but there's not another soul in sight, because this twenty-acre stretch of woods and grasslands is visually isolated from the river.
BACKWARD THROUGH THE FOG
Part of me has been instantly, magically transported back through time to 1974 and I'm a young man once more, aimlessly traipsing through the foggy moors of rural England, trying to make sense of life, searching for some far-off, hidden treasure... But the sharp sound of my dogs barking brings me back to the moment at hand, demanding that I pay attention to the large, green grasshopper they've encountered, temporarily floundering on a log next to the path, strands of spider web wrapped around its hind leg.
SUSPENDED IN THE FOG
I shoo the dogs away to give the hopper time to escape, and in doing so, I notice another spider web draped over the stalk of grass right next to log, and then another web on the next stalk over, then another, and another and another... Holy mackerel! How could I have not noticed this before? There are literally thousands upon thousands of spider webs spread out across this meadow, with a separate web suspended from the tops of almost every single blade, branch and bush in sight. Looking more closely, each shimmering strand of each web is strung with countless tiny, silver dewdrops, creating a breathtaking display of jewelry. Each web is a stunningly complex and eye-catching creation in its own right, but taken as a whole, the vast tapestry of interwoven webs covering acres of meadowland is a potent reminder of just how complex and mysterious nature is, and how wonderfully interconnected we are: grasshoppers, dogs, logs and humans alike.
UPWARDS THROUGH THE FOG
Forty years later, I suppose I'm still strolling through a foggy meadow, trying to make sense of life. Only this time, I'm doing so while carrying my treasure inside my heart: a deep sense of reverence, awe and gratitude for the simple gift of being alive. And, at least for now, this is enough.
With gratitude and blessings,
Rudi
PS: Speaking of travelling through time... I invite you to join me this Saturday night at 8:30pm, when Rudi + the Rudiments will be bringing the Circle vibes to the Olmos Pharmacy, located at at the corner of Hildebrand and McCulloughwith an upbeat blend of original songs and creative cover of tunes from the 60's and 70's. Lots of fun, lots of free parking -- and no cover charge!
Posted by Celebration Circle at 6:32 PM No comments: 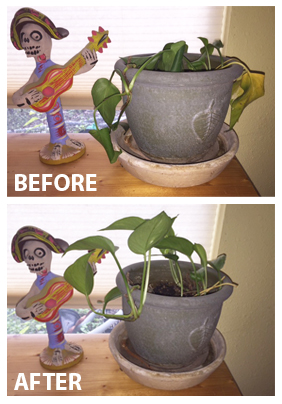 My mother had an extraordinarily green thumb; our home was always filled with plants, and almost every window sill in the house held an array of flowerpots and glass jars filled with cuttings in various stages of growth. She stayed pretty busy raising her six sons, but every spare minute she had was spent outdoors in her flower garden, where friends and strangers alike would frequently stop their cars on the street to admire her landscaping and ask for gardening advice.

Although in recent years I have come to share her love for being out in the garden, I clearly did not inherit her green thumb. So last week it was a little sad, but not at all surprising, to notice that the small, green ivy plant on the corner of the desk in my music room was looking mighty yellow and wilted because it hadn't been watered in weeks.

So I gave it a good drink, picked off the dead leaves, then sat down to play some music. Not because I had a Sunday Circle or a concert to prepare for, but for the sheer pleasure of letting some melodies come flowing through. Less than an hour later, the ivy looked just as healthy as could be - and I was feeling much better, too. In addition to being a graphic demonstration of how strong the life force can be, it was as if the ivy was reminding me that it had been way too long since I sat down and made music for the sheer of pleasure of "watering" my soul from the inside out.

I've noticed the same thing is often true when folks come to me for spiritual direction and start talking about some situation they're struggling with. The details may vary, from issues to professional concerns or personal difficulties, but invariably, the basic problem is that they're feeling weary and wilted, because they have neglected to tend to their inner lives with some form of prayer, meditation, reflection - or in my case, artistic expression.

Having been reminded by that little houseplant myself, now I'm taking the liberty of asking you: How long has it been since your Inner Self has been "watered?" And what in the world have you (and I) been waiting for?

Posted by Celebration Circle at 7:06 AM No comments: