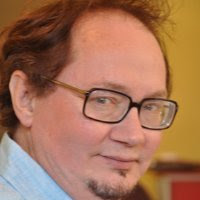 gary s. whitford was one of a kind, signaled in part by the fact that he preferred to spell his name that way, without capital letters. He was a prolific writer, marketing guru, musician and cultural activist who used his gift for communicating extraordinary words to help foster the new story of peace, hope and possibility being born in the midst of our Dominator culture. When he passed away last week at age 66, the Celebration Circle and the wider community lost a rich, resonant voice.
GETTING IT STARTED
The Gary (which is how he liked to refer to himself, in third person) was one of the co-founders of the Celebration Circle, the one who talked Zet and I into convening a meeting in our living room with him and four other friends, where we decided to hold an alternative, lively Sunday morning gathering. And he's the one who appointed himself to write and print 100 copies of a flyer inviting folks to attend the first Sunday Circle on January 19,1992. This was before the days of desktop publishing, when it was still a complicated and expensive process to get a flyer printed, and Gary was the one who took care of that for us, printing all of our newsletters and announcements for the first several years of the Circle's life.
GETTING IT DONE
It was he who wrote the initial draft of our Articles of Incorporation, and the one who figured out what to say on our application for non-profit status with the IRS. And when it was time for our first Circle website, it was The Gary who co-created the vision for it and wrote much of the copy that brought it to life. He wanted no part of religious dogma; he always sought to cultivate an on-going conversation about the daily struggles with faith that lie at the heart of an authentic, multi-dimensional spirituality grounded in everyday life.
GETTING BEYOND SADNESS
In recent years, he went through a divorce and had health issues that caused him to pull back from public life quite a bit, but he remained a loyal friend and loving supporter. It was a shock to hear of his death, and part of me was certainly sad. But then, in going through his writings while preparing for his funeral, I found an email that he'd written shortly after his first heart attack several years ago, that began:
"I think it's very important to take the sadness away from death. I know we're gonna miss whomever, such a fine person to us, but we live and then we die. After death is mystery, so it's the life that counts. It's the orgasms...the laughter, the thrilling art, the lessons joyfully learned. It's the survival, not the tragedy. Make the most of life while whomever is alive and sing praise to that time when whomever passes. That is very important to me - they cried so much when Craig passed, they couldn't rocknroll. Make sure that doesn't happen when I go - I want a party - yeah, I know I won't know or care or be there, but dammit, they need to ROCK HARD. I have been incredibly lucky."
And finally, there's this reminder, taken from one of his many poems:
"I take this breath,
offered by the Eternal Good
that blesses all life.
I take this breath on purpose, with full consciousness.
With this breath, I reach for eternity.
I am Spirit being me."
Thanks for the Good Words and your boundless love, dear friend.
With gratitude and blessings,
Rudi Harst
THANK YOU for holding the Circle in your heart by visualizing a generous flow of financial abundance. Thank you for supporting us as we continue our work of fostering a creative, inclusive approach to spirituality. We are deeply grateful.

Posted by Celebration Circle at 6:27 AM No comments:

ALL THE SAME BUT DIFFERENT 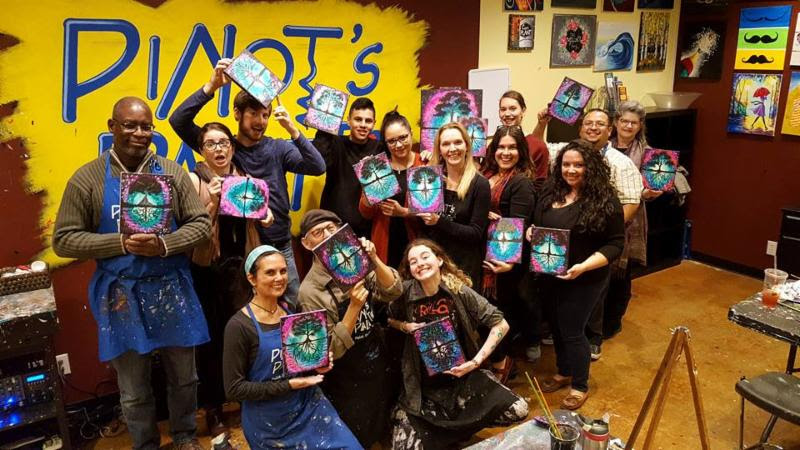 I was pleasantly surprised by how much fun I had painting with the folks at Pinot's Palette during the Circle Celebration social last Tuesday night. It was a hoot! Zet was planning to attend, but she had another obligation, so I went in her place. I arrived feeling pretty skeptical, because I've never enjoyed painting very much; the few times I'd tried it, the brush always felt awkward in my hand.
FEELING GREAT
But within minutes of walking into the studio, I got caught up in the joyous, exciting vibes of this group of Circle friends, all creating our own versions of the same image under the direction of the staff artist. There was a lot of banter and nervous giggling to accompany our creativity, but also lots of snacking and singing along to the up-tempo soundtrack of 80's pop hits booming in the background.
Like I said, I wasn't expecting much in the way of results, so I had fun just goofing around, trying to follow the teacher's instructions while talking, singing and enjoying the company. But, much to my surprise, when we finished the process two brief hours later, I actually liked my piece. And when we assembled to compare and admire each other's handiwork, I was truly blown away by the beauty and diversity of the images we'd created, as demonstrated in the photo above.
LOOKING GOOD
The thing is, we were all following exactly the same instructions from the teacher, and all given an identical 8" x 10" blank canvas and a palette pre-loaded with the same eight colors of acrylic paint. And while we all all ended up with the same image, each was also very different from the others, too: richly-detailed and highly-individualized expressions of creativity.
What a splendid demonstration of divine paradox, containing both our unity and diversity, our all-One-ness and aloneness. It's one thing to know it intellectually; it's quite another to see such a vivid, physical and tangible illustration. Definitely one of the more fun-filled spiritual lessons I've received lately! Join us on Sunday morning and you'll have a chance to see them displayed on the altar.
With joy,
Rudi Harst
THANK YOU for holding the Circle in your heart by visualizing a generous flow of financial abundance. Thank you for supporting us as we continue our work of fostering a creative, inclusive approach to spirituality. We are deeply grateful.

Posted by Celebration Circle at 12:00 PM No comments:

INVITED TO THE FEAST 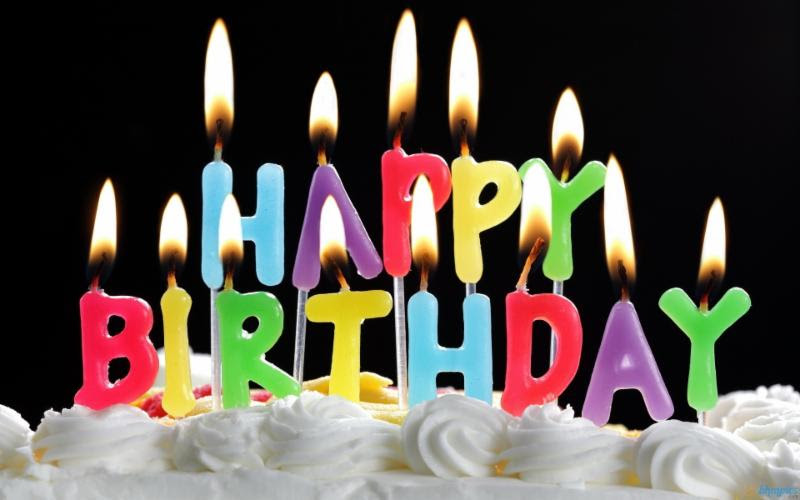 There are a number of reasons why I'm really looking forward to our 26th Circle Birthday party this Sunday-- including the fact that we're still continuing to grow as a spiritual community 26 years later. And that we'll have a great big, tasty birthday cake! Also high up on the list is the delicious potluck lunch we're certain to enjoy immediately following our Morning Circle.
FED BY THE PROCESS
There's always something magical about the wide variety of food that Circle folks bring to our communal feasts. Even without a signup sheet or advance planning, invariably there's a delightful balance between vegetarian and meat entrees, spicy and mild side dishes, vegetables and desserts. Some folks clearly spend a lot of time preparing their favorite, home-cooked specialty; others grab something from the deli section at Whole Foods, or perhaps some crackers and chips from the corner store. Each has their own style and preferences, but the wonderful thing is that when they all come together on the buffet table, everything always seems to work out perfectly, with a wide assortment of tasty foods that's more than enough for everyone present.
BLESSED BY THE GIFTS
In many ways, this potluck process seems like an apt metaphor for our independent, interfaith Circle community, comprised of individuals from a wide variety of faith backgrounds, lifestyles and modes of expressing our inner selves. Many were raised with traditional Christian backgrounds and are now seeking to widen their understanding of other traditions; some have a personal meditation style arising from their interest in Buddhism or a yoga practice, but are wanting to ground themselves in a wider community. Some are seeking a deeper connection to the Earth; others are seeking transcendental experience; some are longing for a place where they can dance and celebrate their faith to the rhythms of live music, while others prefer to remain seated and simmer in stillness.
TOUCHED BY THE WHOLE
But each time there is a Circle gathering and our sacred space is created, all of these individuals become part of the greater whole that is our Circle family - and all are miraculously fed by the process, each according to her own needs and his own understanding.
I, for one, embrace all of it, and am deeply grateful for what you - like every other person involved - bring to the ever-evolving, ongoing feast that is the Celebration Circle. I really hope to see you at our Birthday Party this Sunday, or sometime soon, and send rich blessings to you on your unique spiritual path.
With joy,
Rudi Harst
THANK YOU for holding the Circle in your heart by visualizing a generous flow of financial abundance. Thank you for supporting us as we continue our work of fostering a creative, inclusive approach to spirituality. We are deeply grateful.

Posted by Celebration Circle at 7:38 AM No comments: