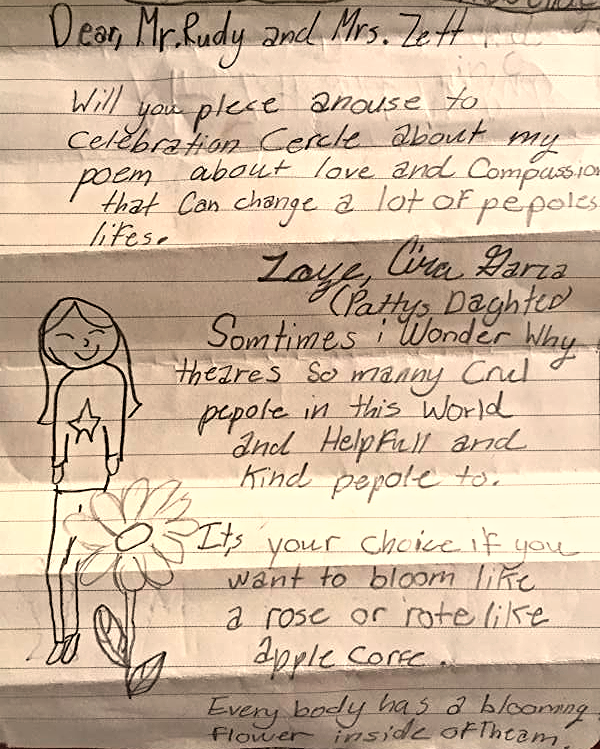 For most of my adult life, I've focused on exploring, experiencing and expressing an inner path to personal and planetary peace. It's been my work, play, passion and pleasure.  It's richly rewarding work, but filled with plenty of challenges and confusion along the way. Engaging in this process of reading, writing, contemplating and communicating about the power of making conscious choices in daily life can feel very fertile and futile by turns, because there's always more to learn.
SHARING GIFTS
Over the years I've had the good fortune to share this work in a variety of contexts: concerts, classrooms, congregations, corporations - and, of course, the Celebration Circle community. I can't speak to the value of what I'm able to contribute to the effort, but time and again, I'm amazed at the deep feelings I receive from other peacemakers I meet on this path. Their gifts can take many forms, each with its own weight and measure to add to my inner treasury.
That was definitely the case last Sunday, when a sweet, nine-year girl named Cira shyly handed Zet a tightly folded note after our Closing Circle. If you can read the words of her poem in the photo above, perhaps you understand why my eyes started welling up with tears when I saw it. But, just in case the words aren't legible on your computer or mobile device, here's what she wrote (with a few spelling changes for clarity):
Sometime I wonder why
there's so many cruel people in this world
and helpful, kind people too
It's your choice if you
want to bloom like
a rose or rot like
[an] apple core.
Everybody has a blooming
flower inside of them.
Thanks so much for sharing your gentle reminder, Cira!
With gratitude and blessings,
Rudi
In the spirit of sharing peace, I am playing music for a production of "Waiting For The Moon" at the Carver Community Cultural Center, 226 N. Hackberry at 8:00pm tonight. This dramatic performance combines the powerful words and imagery of local Syrian poet, Lahab Assef Al-Jundi, with contemporary interpretive dance by Fa Winsborough and Stardust Dance Company plus music by Swami Ananda Nadayogi. This performance speaks to the peace efforts and the lives affected in war torn Syria. Tickets are $20 and available at the door. For more information visit the Carver website here.
Posted by Celebration Circle at 8:09 AM No comments:

EXTRA! EXTRA! READ ALL ABOUT IT! 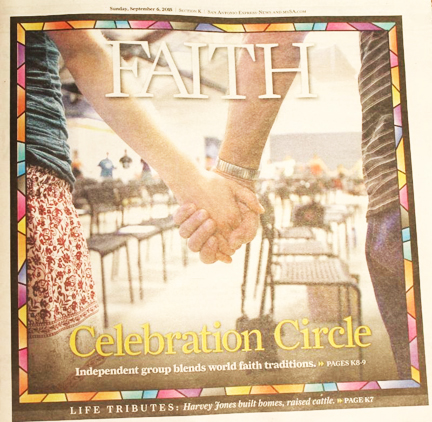 Did you get to read the article about Celebration Circle that was featured in the San Antonio Express-News last Sunday? Written by Elaine Ayala, Staff Reporter and Religion Editor, it was the cover story of the Faith Section, a separate pull-out magazine tucked into the middle of the paper.
It sure felt good to get such great publicity for the Circle in our city's daily paper.  It was also interesting to see our community through the eyes of a professional, outside observer like Ms. Ayala, based on what she learned by interviewing Zet and I for almost two hours, then attending a Sunday Circle, before filing her article.
Her article appears below, partially because I'd love for you to be able to read it, if you haven't already done so, but also because I'm wondering what YOU might have added (or subtracted) from the article had Ms. Ayala interviewed you. If, after reading her words, you have some of your own to add, I'd love to hear what you have to say. If you would like to share your comments please send them here.

Group looks to diverse faiths to form its own; In Celebration Circle, 'We Are One'San Antonio Express-News (TX)
Sunday, September 6, 2015
Author: Elaine Ayala
The people of Celebration Circle break bread as part of their Sunday services. They sing praise songs, light candles, pray for peace and people, near and far, and listen for a message of hope.

But like Native Americans, they start services by facing north, south, east and west, opening themselves up to the four directions and to all creation. "O, great spirit," they sing in unison, "earth, sun, sky and sea." In a nod to New Age spirituality, they engage in guided meditation.

And like many church congregations, they have a band - "a great band," said spiritual director Rudi Harst, and a key element.

In all these traits, the independent San Antonio group has drawn from diverse faiths to create one all its own, unfettered by a denomination, hierarchy or headquarters.

Its oft-repeated mantra: "We are one."

Now in its 23rd year, Celebration Circle was founded by two San Antonians with deep roots in community and faith. It meets Sundays in the SAY Sí building on South Alamo Street. Its weekly meditation circle is held Wednesday nights at the Quaker Meetinghouse, 7052 N. Vandiver.

Harst comes by faith honestly. "It was very much in our DNA to find a meaningful relationship with God," he said of his Eurasian family. He self-identifies as Unitarian Universalist and says God can be Jesus, Allah, Buddha or any other deity. He won't argue with the righteousness of any of them.

But he's not as interested in talking about God "as I am experiencing God," he said.

Celebration Circle, which honors "the sacred in ourselves, each other and all creation," doesn't have members. "You can't join because everyone belongs," Harst said.

About 200 people attend in any given month, and about 300 give on some level; some once; some more routinely.

They are a diverse lot - Anglo, Latino, African-American and Asian; young and old; singles and families. It's a come-as-you-are affair.

Celebration Circle, a 501c3 nonprofit group, is a reflection of its two founders, Harst and his wife, Zet Baer, its executive director.

Third-generation Indonesian Dutch, Harst was born in Holland, where his family immigrated after World War II. His grandfather, a lay minister in Jakarta, was imprisoned by the Japanese during their occupation of Indonesia. The family landed in the United States, again as refugees, sponsored by a New Braunfels church, to which Harst's parents remained faithful.

His challenging upbringing was informed by the civil rights movement. "White people thought we were Mexican," he said. "Mexicans knew full well we weren't." He never felt that he quite belonged.

Two of his brothers became ministers; two others cops. "What does that tell you of our need to find order in a disordered world?" he asked.

At Trinity University, Harst continued to ask questions about God, spirituality and consciousness. But he had little interest in theology.

On a recent Sunday, he talked about the world's obligation to assist immigrants seeking refuge from poverty and violence. "Love your neighbor as yourself," he said. "It's not just a good idea. It's the way forth."

Much of what Harst is and does, spiritually, is related to music. He picked up the guitar after watching the Beatles on "The Ed Sullivan Show" and has played ever since.

Zet Baer grew up in the Methodist Church and says her main spiritual foundation came from her grandmother, who rooted her "in her belief in the divine." Her faith was also inspired by the sense of community she felt there.

At the University of Texas at Austin, the artist and organizer (she coordinates the King William Fair, too) practiced yoga and embraced New Age spirituality. She explored Buddhism, meditation and dance. She teaches Journey Dance, and she said it's part of her spiritual practice.

Harst and Baer, both 63, lead Celebration Circle with a council of stewards. Harst jokes they have "full-time jobs with part-time pay."

September is a busy month. Celebration Circle's 12th annual altar exhibit at Santikos Bijou Cinema just opened. Each of its nichos, or small shrines, began as raw pine wood frames. Each was transformed into a work of faith and art. "One People. Many Paths: Sacred Art of Altars" will close Sept. 30 with its silent auction. The 2012 film "The Way," starring Martin Sheen, will be screened. Tickets are $15; $20 at the door.

On Sept. 19, Celebration Circle will host another fundraiser that speaks to its unique brand of religiosity. Held in the Cave Without a Name near Boerne, "Underground Sounds" will celebrate the fall solstice with a concert featuring guitar, percussion, flute, keyboard, the Indian violin and didgeridoo.

Vocals will soar 90 feet from the surface in a cavern brimming with stalactites and stalagmites. Part of the concert will be performed in total darkness. And in those moments, deep in the ground, Celebration Circle will remind those who attend that, as one, people must be worthy stewards of the Earth.
Rudi
PS If you are a digital subscriber to the Express-News, here is the link to the entire article with photos.
Posted by Celebration Circle at 8:19 AM No comments:

UP ON THE ROOF 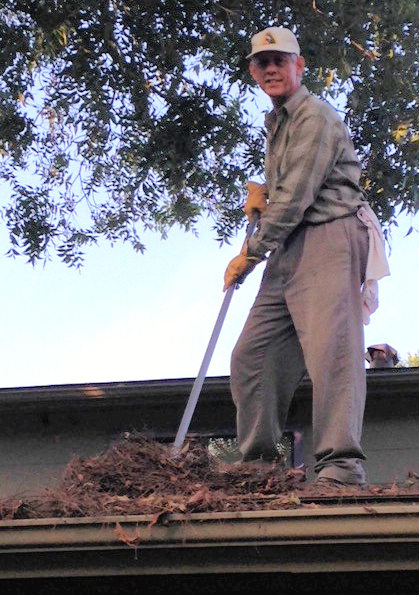 I'm cleaning the roof and gutters at home today. It's one of those unavoidable chores every homeowner around here must face: clearing the leaves and twigs that dropped over the long, dry summer before the rainstorms come (hopefully) as they often do in South Texas.
DOWN ON MY KNEES
This task involves a fair amount of work, clambering up and down the ladder while hauling tools, inhaling some dust and pollen, crawling around the edges of the roof and digging my hands through the gutters to dislodge the tightly packed organic matter. Meanwhile, I'm doing my best to ignore the fluttering sensations in my chest each time I look down to see the looming distance between my head and the ground below.
It's a little bit thrilling, a little bit scary, and a whole lot of sweaty, but it's a task that needs to get done. On the whole, I don't mind too much, because it's such a sweet, satisfying feeling when the job is finally finished and I get to stand on the newly swept roof, surveying the empty gutters and the unfettered view of our yard and gardens below.
LOOKING WITHIN
Even as I stand feeling quietly elated, I know all too well that it'll be necessary to climb back up here to do the very same thing this winter, after all the autumn leaves have fallen and the gutters have gotten clogged again. That's just the nature of the task and one of the ongoing joys of home ownership.
As I continue to stare at the view, I suddenly become aware that this would be a good time to clean my "spiritual gutters" from the inside out, too. That as summer winds down and autumn approaches, it would be helpful to undertake a day or two of extended meditation, time for some extra study or prayer work. It's just one of those things that needs to be done periodically for the sake of maintaining a clear, well-functioning internal guidance system for navigating life.  I don't know what form it will take, but I make a silent promise to devote at least one full day, maybe two or more, to clearing out the inner debris that has piled up over the course of another busy season, full of doing, going and growing...
LOOKING AHEAD
Does this thought ring true for you, too? If so, you know what to do, don't you? In any case, I send rich blessings on your spiritual path, wherever it may lead in the coming days and weeks ahead.
With joy,
Rudi
PS:  If, for whatever reason, you aren't able to give yourself the gift of time for rest and reflection before then, consider coming to the Circle's Fall Retreat that Zet and I will be facilitating at Slumber Falls Camp in New Braunfels on October 16-18.  I guarantee you'll be glad you did!
Posted by Celebration Circle at 8:25 AM No comments: